Posted by fenix at 08:45 No comments: Links to this post

Up to date, our school had stripes only for white belts. But following some recent rule changes, there will now be stripes for the coloured belts also.

Sooooo..... yesterday evening, we had a grading. Two guys got their fourth stripes on their white belt. And to bring us in in line with the new system there were multiple white stripes for some of us. Four on Ben's purple belt, two on Mark's blue belt and four on my own blue belt. 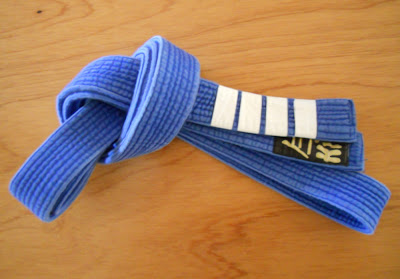 Feels funny. I was so used to the idea of no stripes, that it seems odd now :-)