do BJJ, get mad skilz!

Yeah, you learn to move upside down, back to front and (almost) inside out. Ergo, weird contortions are no problemo for BJJ players :-)

I had a fantastic opportunity to show off my skills to friends the other night. After dinner, we took to the recliners. And after some five years of having the damn things, I decided it was the night to finally take the plastic covers off the foot rests. They were sewn on, so they needed careful cutting along the edge, instead of just ripping them off as I'd hoped. So I got my trusty scissors and took to the floor to perform the operation. Pesky little bastards were awkward to get to, so I had to resort to my mad upside down contortion skilz, and here is evidence: 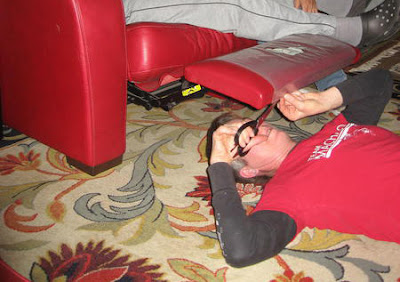 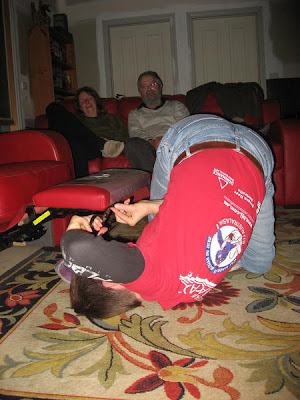 It didn't feel in the least bit awkward :-)

Posted by fenix at 19:09 No comments: Links to this post

Email ThisBlogThis!Share to TwitterShare to FacebookShare to Pinterest
Labels: funny

Last Friday, we had another seminar. This time, I didn't have to travel, as John Will came to our school in Ballarat.

We had a two hour long session with the main theme Z-guard. We learned 3 back takes from there and one attack to front choke. Then we worked on 3 sweeps and another attack, being a figure four. One of the sweeps was a reverse Berimbolo, which is something I've been wanting to play around with for a while.

Interesting stuff, and I've been playing with Z-guard for a while. So it was excellent from my point of view. Since then, we've had one class where we've gone over some of the back takes, and I'm sure we'll do more sessions.

On May 18, a few of us went to John Will's Black Belt Studios in Geelong to attend a 3 hour long clinic with Carlos Machado.

That was a real treat. He is an entertaining guy and a superb teacher. We didn't go into any new and/or fancy moves. It was all about principles and overarching themes. Also about little things that make well known techniques better. For example, how to use a slight angle and a certain stance to make a standing guard pass a high percentage move. How to be more effective with a cross lapel choke from mount and to force a finish if the opponent defends the choke. Also a lot on guard passing (by popular request), which boiled down to good defensive posture and what he called "holding the tray". Small circular movements, using elbows and hands had big effect when used in conjunction with this posture.

He said when he started that he doesn't like to exert himself, being a "lazy" grappler. That sure appealed to me ;-)

He demonstrated his defensive open guard techniques by picking the biggest guy on the floor. I'm not kidding when I say this guy is huge, and I know from personal encounters just how big and heavy he is... Well, Carlos insisted he uses all his weight to try and pin his legs down, and then effortlessly wriggled out! We also looked at side control escapes (also by popular request), which was a real eye-opener. As with all other stuff we learned, relatively small things which made a big difference.

Overall, a great seminar, and I would recommend anyone to snatch up the opportunity to train with Carlos.
Posted by fenix at 23:05 No comments: Links to this post

comps do weird stuff to your brain.

Oh yeah, I have some catching up to do... I've been so busy! But now that the semester is over, and all work handed in, it's time to take a breath, slow down and catch up on things :-)

First things first, I went to the GTA Championship in Melbourne on May 13. It was, like last time, a fairly well run comp. It did run a lot later this year, but it's a friendly comp and I enjoy it.

Nothing spectacular to report. I was up against Jodie in the "belt/weight/age" division. As usual, that meant up a couple of weight categories, and down an age group ;-) But still no excuse for getting smashed. Jodie is a great competitor, and very strong. When I say strong, not in the negative sense, either. She uses her weight well and with accuracy. I stupidly pulled guard although I know she is a strong guard passer. So it wasn't too long before I paid the price ;-)

After that, we had a combined coloured belt women's division with 8 or 9 women. I drew Sunny, who is a purple belt. Not too long ago, she competed against Kyra at ADCC and lost on points. So I was quite happy to have a reasonably long fight with her, during which I didn't spend all my time on the bottom, and some of it was slow, intelligent grappling. I used open guard well. I survived her initial guard pull with instant triangle attempt and it was an enjoyable grapple before she eventually got my back and went for a lapel half nelson which I couldn't defend. She was clearly better than I, but I didn't mind, because I felt I rolled well.

The best part of the day was that I turned up not wanting to be there, and leaving with enthusiasm to go and do it again. Ironically, I got a silver medal for my crappy fight, and nothing for my good fight. Also ironically, I got my arse kicked in both fights, yet now I feel I'm happy to compete again.

Posted by fenix at 22:38 No comments: Links to this post