where are all the grappling women?

I was hoping to compete in a small grappling comp last weekend. I recently joined the Victorian Wrestling Association because they run several grappling tourneys per year in the Melbourne area. There was a comp on Sunday and I put my name down for it. Sadly, no other women entered. :-(

I'm hoping there will be some female competitors at future events. On April 10, they are running the Australia Cup, which will include grappling and pankration matches. This will be run under FILA rules. More details are on the AusPankration Website.

Ok, girls, pull your fingers out and enter!!!

I've been in touch with Jack from VWA. He suggested something else of interest. On March 5, there will be refereeing clinics in Melbourne for grappling and combat grappling. His argument is that a female referee may have a positive effect in drawing more women into the sport. Well, the question is whethere I have the necessary experience to be useful as a potential ref. But it certainly sounds interesting.

That aside, there is a More Grappling Round Robin Grappling tourney coming up at Dominance MMA in Melbourne, also on the 5th March.

The Victorian BJJ Championships are scheduled for March 18-20. Also in Melbourne. That will be gi and no gi.

And looking further down the track, the date has already been set for The Gathering, which are the Will Machado Championships: 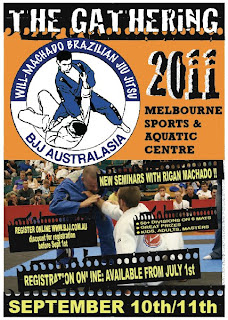 P.S.: the lack of female competitors does of course raise the question whether mixed matches should be allowed. This is just being discussed over at Georgette's blog. I personally don't have an issue with it. In fact, the no gi More Grappling RR in 2010 which I competed in was mixed.
Posted by fenix at 11:47