The Gathering and other weekend stuff 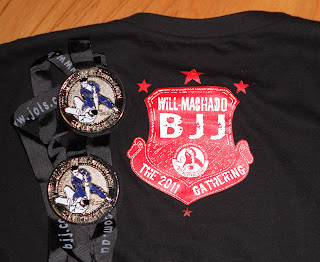 The complete set of results is on the Will/Machado BJJ Australia site.

I had a mixed weekend. I actually had a fair bit of fun and overall, I felt that I went well. Numbers were down this year, so there weren't very many women. Only one other blue belt, so I competed against her in the 16-29 / over 74kg division. And got beat up :-) Placing: 2nd out of two. Woopee...

To give us girls a bit more fun and to have something for a visiting NZ purple belt lady to compete, they put on a mixed women's division at short notice. This was actually held just before the other one. There were the two blue belts, the purple belt and one senior white belt from NZ. I drew the white belt for the first round. It was interesting in that I had a chance to play my game against a very technical opponent of my size. She pulled guard and went straight for an armbar. But I passed her guard and it went from there. As so often though, I couldn't get anything from side control and eventually, things ended up such that she was in my guard. From there, I launched my usual attacks. Almost succeeded in getting her back. Couldn't finish anything off though and finally won on points.

The next (final) round was against the purple belt lady who had won her fight over the blue belt. This was a fun fight. I spent most of it defending. Eventually, I got armbarred. Really technical she was, and it was great. Even the grip fight at the start was good. I'm hoping that someone took footage of that one! Compared to other women I've competed against, she used technique, not grindy, nasty stuff.

So that was a 2nd place out of four.

Nothing to set the world on fire, but I found the right mix of being competitive and laid back and generally just enjoyed the day. What was also great was the chance to see most of my team-mates on the mat. They all did really well. Most brought home some shiny medals. But whether they won or lost, they all showed some awesome technique. And I think they all had a good day as well.

Sunday morning was the seminar with Rigan Machado at Dominance in Richmond. It revolved around d'Arce chokes and a bit of deep half guard entry to sweeps. Really good stuff.

On the way home, I got stuck in a traffic snare just before the Westgate Bridge, which resulted in an extra 3/4 hour I had to spend in the car. By the time I arrived home, I was nicely stiff and pretty worn out.

Another fantastic thing about the weekend: I finally (after 15 years or so) caught up with a good friend of mine. We used to go to agricultural college together back in 1982-85. Ha, yes, there was a bit of reminiscing.

And today, the post-weekend effects: sore shoulders, some matburn, still a bit tired and a messy house :-) But, more importantly, the memory of a great weekend and a lot of food for thought for weeks and months to come. I'd call it a success.