On the last day of my Vietnam trip, I had the chance to join the guys from Saigon BJJ for a class and some rolling. I had contacted Matt when I found out about the gym and he invited me to come and drop in on the Saturday afternoon.

BJJ is currently only available at three schools in Vietnam, two in Saigon and one in Hanoi. As far as I understand, they are all no-gi schools. Matt told me that they are looking at gi classes in the near future though.

Due to underestimating the Saigon traffic and the distance from the hotel to the fitness centre, and some problems in getting into the place, I was a bit late for the class part of the afternoon. However, I still had the chance to get in some reps of several techniques. Essentially, the class was about guard passes and knee ride. Not all new stuff to me, but knee ride isn't really part of my game, so it was good to work on that side of things.  This was followed by a bit of situational rolling to give people the chance to practice the techniques.

After the class, there was some rolling. I enjoyed a thorough butt-kicking from four of the guys :-) One particular roll I will remember for a long time. The guy tells me he's a bit rusty, and had several months lay-off due to an operation. Then he proceeded to demolish me by way of some of the most continuous, switching-sides, surf-the-wave type of knee rides I've ever encountered. Yeah, I did fend of a lot of subs. But I was forced to turtle several times just to escape the pressure. And no, I'm not a knee-ride woos, we have a couple of guys in our school who use it. However, this was out of the box... Still, good times :-)

Here are some pictures of the drilling part of the class: 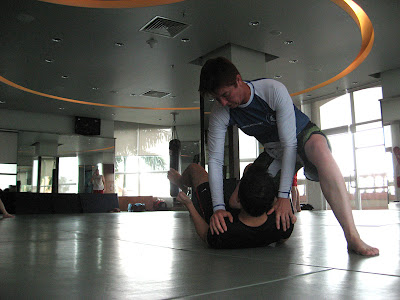 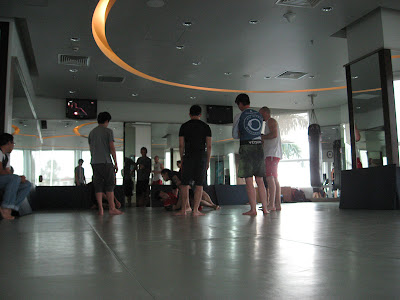 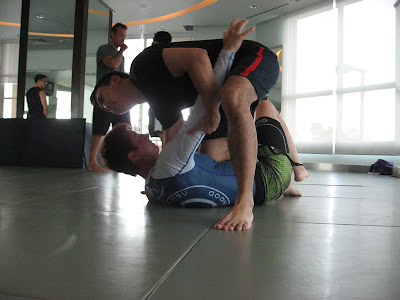 Hehe, and they liked my BJJ Brotherhood rashie :-)