athletes in all shapes and sizes

Email ThisBlogThis!Share to TwitterShare to FacebookShare to Pinterest
Labels: athletes, other sports

At the end of John's seminar on Friday evening, I was promoted to purple belt.

It was less scary than I imagined it would be :-) 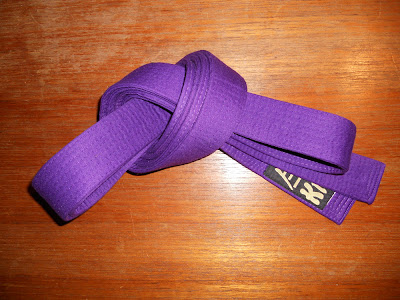 Email ThisBlogThis!Share to TwitterShare to FacebookShare to Pinterest
Labels: John Will, purple

Last Friday, we had John over for another seminar. His theme was the deep collar grip.

He first taught a series of collar drags from standing, then from hooks in guard. The open guard section also went into how to keep distance and angle.

I've been training regularly and consistently and feel I'm making steady progress. Sometimes more, sometimes less. But lately, I've been flat out with my computing honours studies and I'm changing jobs, so there is a lot on my plate. Consequently, there has not been enough time to write here on in my horse blog.

I'm glad I have BJJ, as it is my release after long hourse in front of a computer, be it at work or uni. So while I've been unable to spend any leisure time on indulging in BJJ training DVDs, I still make the time to train. And although I'm a bit less intense on remembering and thinking over everything after ever BJJ class (just no time!!) and taking it more as a recreational activity, I'm still training. And that is the important thing, I think.

I completed my IT degree late last year, and I graduated in early May. The uni had a nice surprise in store for me. In addition to graduation with Distinction (which I knew), they awarded me the University medal for outstanding academic achievements. I didn't know until the graduation ceremony, so I was a bit in shock to be called back up on stage to receive the award. Since then, they have bestowed three more awards on me. I'm also doing fairly well in my honours course and I'm seriously considering a PhD course afterwards. Anyway, I'm studying because I really enjoy it, not because I'm seeking recognition. But occasionally, a pat on the back is a nice thing.

I do attribute at least part of my academic achievements to my martial arts training. I will admit that in my former life, I used to be a bit prone to taking the easy road, quitting before something was finished or generally saying "too hard", "can't do it" and many more of the same. And to be honest, I doubted my own capabilities all the time. Without question, I have better resilience, more determination, a better ability to cope with stress and more discipline than I had before I started training. I just have a much better head space. I am better organised and more efficient, so I actually feel that I achieve much more. But best of all is the fact that I'm more aware of my physical and mental limits and therefore more confident of what I can do. I guess that comes from pushing the envelope (physically and mentally) and learning and growing from the experience.

This write up is coming a bit late :-)

It was two days of informative talks & presentations, rolling sessions, instruction and general quality time with the other ladies.

I hear that sessions are planned for Sydney and the Gold Coast later on in the year. I would urge any lady interested in BJJ to attend these sessions.

We had John Will for a seminar on Good Friday. A great session, as usual.

Various entries to the positions and an assortment of finishes. It taught me a much better understanding of the whole position. But it also opened my eyes to the fact that it is effectively a specialised version of back control. I had been thinking of that, as we had looked at another combination not long before, and I idly wondered just how easy it would be to go to either crucifix or armbar, depending on whether my lower leg went over or under the body. So that was another mini-revelation.

John told a bunch of funny stories and it was an entertaining as well as instructional evening.

Afterwards, Ben was promoted to Brown Belt. Ben is just the best training partner and we were all over the moon to see him wearing the new belt.

Yay! It starts tomorrow!! The Australian Girls in Gi Camp III. If the previous two camps are anything to go by, then this one will be a ripper. It's a different format again, and it sounds awesome. Jess and her helpers have been busy!

I'm so in need of a break and I'm so looking forward to catching up with friends and meet the new ladies who are venturing into BJJ. Packing my bag tonight will be a pleasure.

The Age ran an article last week about AGIG and the camp. This article was also published by one of the Sydney newspapers. Great to see that BJJ and specifically the ladies are getting exposure in the mainstream media.

AGIG Camp III will be run at Dominance MMA in Melbourne on March 23 &24.

I'm going! The last two camps were awesome, and this one is bound to be the same. Jess Fraser and her crew of helpers do a terrific job. I can't wait to meet all the ladies again, and to benefit from the program Jess has put together for us.

I hear that a few spots are left, so if you are sitting on the fence, go and book in!!

you have the right to be strong

A friend pointed me at this great post about women and training titled: A Lion in Iron: Women—Be More, Not Less (by Alexander Cortes).

While the post is written from a weightlifting/strength training perspective, it offers great advice and could equally apply to martial arts.

My favourite quote from the post:
"For women, though, it’s the opposite. Their whole perspective is based around what they want to get rid of. They want their bodies to be less than what they currently are, not more. The whole female side of the fitness industry has historically been built upon “getting rid” of everything about their bodies that makes them unhappy, which is generally everything.