I've just entered the Synergy Pro BJJ comp. It will be held next weekend in Adelaide.

I hear that a few of the girls from Melbourne are renting a mini bus to head over. Sadly, I can't join them, as I dare say it'll be an entertaining trip :-)

I have to pick up three horses from near Bordertown, so I'm taking a horse float and will be picking them up on the way home. This will be a pretty long trip. We'll be leaving Friday and returning some time Sunday. But as I'll be killing two birds with one stone, it's not too bad. To be honest, without the horse pickup job, I probably wouldn't have attended the comp. So it's all good.

I'm not feeling top of the world today, but I'm hoping that I'll be ok for next weekend. It is the season of colds and flues here, and I'd be awfully annoyed to get sick now...

After a rather busy week (2 sessions Monday, 2 sessions Wednesday, double sessions Thursday and Friday, and a normal one on Saturday, I went to a seminar in Ringwood.

The seminar was hosted by Deon and Jodie at Perkins BJJ.

Bruno Alves and Antonio Carlos Jnr ran a joint session which attracted people from several clubs. It was a very relaxed two and a half hours with plenty of individual attention.


Bruno is an omoplata machine, so he showed us two omoplata setups, one from side control and one from a sprawl on top of a double leg attempt. The third submission he taught was a neat setup from closed guard to triangle, but which could equally as easily be converted to omoplata.

Antonio showed us three related sweeps from an open guard setup. None of us had see this open guard before, so the question was asked what it's called. He sort of shrugged his shoulders and laughed, so it was instantly christened "Antonio Guard". Of course :-)

After that, we took turns practicing open guard passing. Ha, when I stepped into their open guards, it was like entering a lion's den, and it was a quick kill indeed.... I haven't felt so out of my depth since I stepped on the mat as a fresh white belt. Whoah...!

Anyway, both were really nice guys, more than happy to help and answer questions. I like the way they taught as well, it made sense. There was enough detailed information, but there were overarching themes. I came away with a far better understanding of omoplatas, in addition to knowing new ways of going for them. The open guard sweeps were harder going, but we had a small discussion about foot/leg placement at the finish of the sweep, which go a long way towards explaining some issues to me. With that more general knowledge, I think I can well finish some of my other open guard sweeps with a higher percentage of not getting caught in half guard.

So it was pretty awesome. Jodie took loads of pictures, including the usual lot of silly ones. Check out the PJJ FB page if you want to see them :-)

After the seminar, I stuck around for another hour, as there was a girls open mat. I had a roll with Jodie, Jess, Deone and Anne-Marie. Unfortunately, I couldn't stay for too long, as I had to go to my nephew's 4th birthday party afterwards.

An interesting article at grapplearts.com about the secret subversive power of BJJ for women, by Valerie Worthington, Emily Kwok, and Lola Newsom.

It made me laugh, but I think they have a point.


And then I found this on FB:

Oh yeah. I wonder if I'll get extra points if I achieve several of those in any one BJJ session?

z-guard and other amazing stuff


After the z-guard stuff we did at the John Will seminar, we worked on that stuff in class some more. A couple of us took it on (so to speak) and played with assorted sweeps from z-guard. To this end, we looked up some other options from that position and found some really useful stuff in YouTube clips.

Particularly Robson Moura seems to have focussed on that guard. I then realised that his Fusion 2 DVD set has a load of z-guard techniques, so I have just ordered that set. Meanwhile, I'm going through my other DVD sets, and found some already on Rigan Machado's Half guard  DVD.


As some of the techniques which John showed us are back takes from z-guard, this re-focussed me on back control also. And as though everything comes around in circles, I realised that when I go for an arm drag from closed guard, and can't quite get the back, I can transition to z-guard and get a sweep instead. Just by moving my knee and adjusting my hips. In a way, that's mind blowing, everything is related to everything else, and instead of seeing separate positions and techniques, I'm beginning to see pathways and chains.

Z-guard seems pretty versatile anyway, especially now that I am able to transition from it to and from other forms of half guard. Also, there are some shin in sweeps which I struggled with, and basically forgot about, which suddenly seem not just possible, but very do-able.

So I'm having a pretty good time. Lots of old stuff revisited and some new stuff, all making sense and fitting in with things I can do reasonably well. Lots of growth...


What else has been happening?

I clocked up another semester at uni and finished with good results. Now one more semester to go. Then I'll need to decide if I want to do honors or not. Just not sure yet....

A foggy morning on the way to work...

We're in the middle of winter here. No, it's not like a real winter in Europe or Canada. But it's usually grey, wet, cold and windy and it's getting on my nerves. And when it's not raining, it's frosty or foggy... I only have weekends to go horse riding at the moment, and it's damn annoying when the weekends are a cold, muddy, nasty wash-out. So I just throw some hay at my horses and promise them we'll do stuff when the days get longer (and warmer). But we do get to go riding occasionally, which is nice.

I've been lucky with work and uni load to still have the opportunity to train 5-6 times per week. As my work involves sitting in front of a computer, I also try to get out and run at least once a week. Hopefully, as the days get longer, I'll be able to do more of that, too.

A lot of people are having colds and flues at the moment, but so far I've been lucky. It has stopped some people from coming to training. Some are out with injuries, some are on holidays. So we are having a lot of pretty small classes lately. Still, I've managed to get in some awesome training sessions, including lots of rolling with purple belts :-)

Talking purple, I heard that Tatami is releasing a purple gi (link to Australian site, but it's also available from Tatami Fightwear in the UK and from Budovideos.com in USA):

Whoa! How awesome is that?? It would of course look much nicer with a purple belt. I guess I could buy one and put it aside until someone takes my blue belt away and hits me over the head with a purple one ;-) Not that this is likely to happen any time soon...

There is going to be a Royler Gracie seminar in Melbourne in August. I'm booked in for that and have a car ride organised. Should be fabulous.

Also, I've just booked in for another seminar in Melbourne on July 22. It's with Bruno Almeida Alves and Antonio "Cara de sapato" Junior, and will be held at Perkins Jiu Jitsu. I'm going to visit my sister and her family after the seminar. Looks like a busy and fun Sunday. Yes!

It appears that a lot of big names are making it to Australia this year. But we can't go to all seminars...

Last but not least, I'm booked in to compete in weight and open divisions at the Gathering in September. And yeah, I'll be going to Rigan's seminar :-) 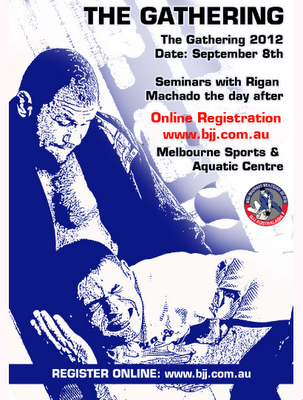