A couple of weeks ago, I tore my gi pants. Pretty much trashed them, in fact: 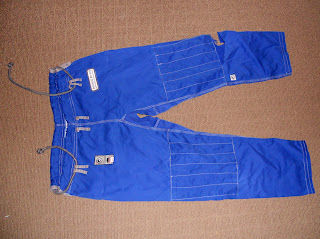 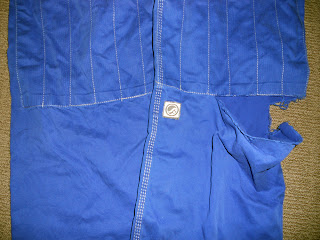 Yes, that's the Shoyoroll pants, belonging to the gi which I've only started using in the middle of last September. This gi has been used in a rotation with several other gis, so it has had a maximum of two training sessions per week for less than 10 months. Frankly, I'm pretty pissed off about that.

I always questioned the wisdom of knee reinforcements which end right under where my knee usually touches the mat when I'm kneeling. For all of the hoo-ha about using the pearl weave material on the knees, what good is that, if the material doesn't totally cover the zone of the most wear? So, the pants ripped right on the sewing line where the knee patch ends. The other side is nearly worn through as well.

I emailed SYR. I didn't whine about it, I didn't ask for replacements, I just let them know it happened and that I'm a little disappointed. No answer. Oh well.

I think I'll attempt a repair, and use them for spares. Meanwhile, I've bought a pair of blue Fuji A2 pants. I've swapped the material drawstring with the nice rope drawstring from the torn pants.

But it's not just the SYR gi pants that are showing premature wear. The collar is rubbing through in several places. There is an obvious wear spot at the back of the neck on one side, and I can see another one starting on the opposite side. In addition, there are wear marks at the bottom of the lapels.

What pisses me off twice over is that this is my favourite gi in terms of fit and comfort. I recently put a big school patch on the front of it, hoping to use it in the comps coming up in September. Well, I can forget that :-(

I bought the Fuji pants because I had a plain Fuji gi for a while. Only thing I didn't like about it was that the A3 I had was just too big. The pants were well constructed and I liked the feel of the material. That's why I got myself a pair of A2 pants in blue, to go with the SYR top (while it lasts...). After one wash at 40 degrees C, they have shrunk a touch and look like they'll fit perfectly. In fact, they fit better than the SYR pants did.

Firstly, here is a picture of the collar of the gi (note that the hole on the right hand side is only just starting to appear). 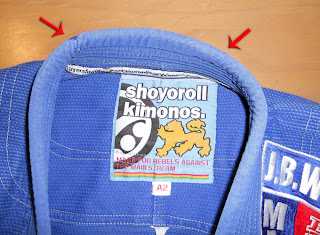 Secondly, here is the answer from SYR, after I contacted them about the gi:

This it is the message I sent to SYR:

After only about half a dozen more wears and washes, the collar is noticeably more worn through: 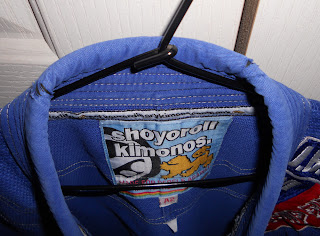