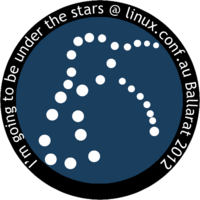 Seeing it's right here in Ballarat, I decided to take some time off work and attend some sessions. It started today and runs for the whole week. Certainly, the talks at the miniconfs today were interesting. I went to some sessions regarding women in IT and programming.

As part of the whole thing, which attracts geeks and wannabe geeks (like me) from all over Australia, NZ and other parts of the world, there are lots of little side meetings and get-togethers. Someone is planning a bof (birds of a feather) session for martial artists. Only down side is the starting time: 06:30 on Thursday. Gawd, I don't function well at that time of night 8-)

But I've put down my name. So far, I'm the sole BJJ player.  Would be so cool if another grappling type person turns up. Anyway, should be interesting :-)

Further to the geeks and martial arts theme... I was listening to some talks about the lack of women in technology type jobs, specifically FOSS (Free and Open Source Software) projects, and what could be done to attract and retain more of them. I see a parallel to the lack of women in BJJ. Obviously, totally different sort of thing, but some of the ideas offered at the panel discussion on the subject of attracting and retaining women in IT may also apply to grappling. The ones that struck the greatest chord with me were a couple of points made by one of the presenters:
1. talk to girls early (ie: at a young age)
2. don't tell girls/women that there aren't enough of them, that's like a guilt trip and it won't work. Instead, give them role models, show them women who do it (ie: IT/engineering/technical jobs) well, are respected, are enjoying themselves and are not necessarily trying to emulate men in the process.

Another presenter spoke of the need to make friends and have like a network for support. That is where for BJJ, groups like Australian Girls in Gi come in.

I think this could translate to BJJ/grappling. Food for thought!
Posted by fenix at 22:39