so much to think about

We haven't covered a lot of new stuff (=techniques) in class lately. Which is good, because my head is quite full enough as it is.

Lately, I see so many more details in the so called basics, details which I've been missing. Which is probably why some of my basic techniques have been somewhat ineffective. Especially since I don't get away with crappy technique as they are mostly bigger than I. So that's good, it forces me to get the basics right.

I'm beginning to understand that I should not give up on something simply because it seems difficult. Giving up is easy. Blaming the technique is easy. But what I need to do is buckle down and try and try again and troubleshoot what is the part or parts of the technique that I do incorrectly. I'm lucky to have an instructor with a great eye for small things and who can dissect things down. So he can pinpoint where I make mistakes and find a way to show me how to do it successfully. He has been quite inventive in thinking up ways to not only explain but to give me little drills that allow me to feel and understand what I need to do.

I know now, more than ever, that my hip movement has been woefully inadeqate. That explains why my escapes aren't that great and why sweeps aren't happening too well. Awareness is the first step to improvement. Then comes a plan. For example, during open mat on Thursday I had a couple of plans. One was to go for arm drags. The other was to use my hips. Basically, I tried to remember to make a bigger effort to hip out or bridge up. As a result, I had better success in regaining full guard. And I finally pulled off the escape from side mount, where I get both arms on the far side, bridge and then rotate around his forearm until I'm head to head. I had never been able to make that work before. So I think I'm on the right track there. Incidentally, I've lately found it much easier to do laps of hip escapes (during warm-ups), and I've been getting much bigger and freer movment. They feel powerful and fast now. On the one hand I'm amazed that it's taken the best part of two years to get decent hip escapes happening. On the other hand, I'm glad that they are happening!

Other stuff I've been working on some more are hooking sweeps. We did some work on setting up an arm drag from sitting (hooks in ) guard and then transitioning to a double hooking sweep if they resist the arm drag. Vice versa, if the sweep fails, I move my weight to the other butt cheek, hip out a bit and can either try for arm drag or for a sweep to the other side. It all involves such fundamental stuff that I desperately need to work on, mainly the hip movement and effective hooks.

We also did some work on arm drags from standing and from closed guard. That, coupled with the guard transitions we practiced a fair bit after the Rigan seminar, is yet another set of related basic stuff. Basic, but fits right into what I've recently been working on, if only from closed guard.

So, without covering much new stuff at all, my head is buzzing :-)

I have a bunch of instructional dvds and books. But at the moment, I refuse to look at anything that doesn't tie in with the stuff I'm working on. I think I finally am starting to have some sort of game plan. Which is nothing like what I anticipated it to be. It's growing in an organic sort of a fashion out from where I feel powerful and have the most success. Guard.

BJJ was always fun, but I'm astonished to see it's more and more fun all the time. 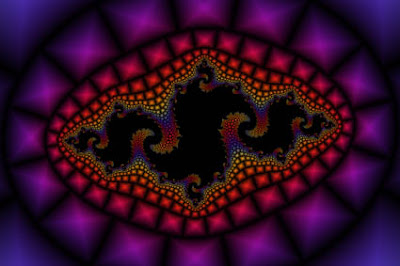 BJJ is a bit like a fractal. Any part of it you happen to investigate is intricate and interesting. You try and get an overview and see the whole thing and make the areas you know fit together. Then you realise that every branch has lots more intricate details. Many of them fit in with other branches. And the more you zoom in and look, the more you see yet more intriguing and interesting details.

I've had an offer to tag along and go to classes down in Geelong, maybe as often as once a week. That means classes with John Will or one of his black belts. I'm sure it will be fun as well as tough going, especially since I now have to attend the advanced classes. I shudder at the thought of a room full of experienced coloured belts. They'll have me for breakfast ;-) Maybe I should have a "fragile - handle with care" sticker on my gi?? Naw, it'll be good and the learning will be well worth it.
Posted by fenix at 14:28