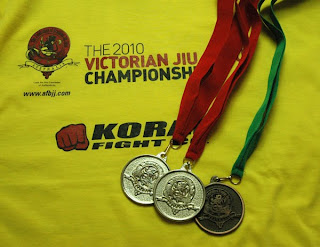 Well, I had a thoroughly great time at the comp. I had some 'nerves' before. Got there early and when they finally set up and the loudpeakers came on, my stomach churned... But when it was time to step on the mat, I was all good. Focussed, but not like with tunnelvision and dry mouth :-) Actually just looking forward to getting into it.

Funny how everyone has been saying that they remember every move they make when they fight in a competition. I don't. I'm often hazy on details. I remember positions but I can't recall how I got there. So if my descriptions are lacking, that's because I can't remember.

First fight with in the gi. She got ahead of me on points early in the piece when she moved to mount. I bridge and rolled out out of that and spent the rest of the fight trying to pass her guard, but time ran out and I lost on points. She couldn't break down my posture and I broke the legs open a few times, but there was always something in they way and she could close her legs again. I had a very good corner man for this and it made such a difference.

Second fight was no-gi. We had a reasonably lengthy grip fight and some pummeling. I think I initiated the takedown but it went pearshape and she ended up in my guard. I had one leg around and one shin across her belly. But I couldn't bring her forward for a sweep so I went for full guard until I spied an opportunity to get a triangle. Got it and tightened it. Remembered I wasn't allowed to pull on the head, only on my knee and remembered to angle off. It was tight but not tight enough. I brought the arm across and still no go. Meanwhile she was standing up, tried to angle off, tried to get her arm out etc. I could hear her corner giving advice. When I realised the triangle didn't do the job, I attacked her arm. Armbar, figure four, cutting armbar, back to triangle, depending on where the arm was. In the end I put the other foot across her face and armbarred her. When I came out, several total strangers congratulated me and said that was a great fight to watch.

Same division, another no-gi fight. I lost that one on points. She tried various things but my defence is first rate (must be all those big guys I wrestle with all the time!) and she near busted her backside to get anything, until I escaped (once from back contol, once from side control). I had her far arm trapped from side control bottom and was within a whisker of getting a reverse triangle. From there I progressed to bottom half guard, and managed a lockdown that she couldn't get out of or launch an attack from. Finally reversed her into a bad position. Had the fight been longer, I may well have won, but I left my run too late :-) Again, a couple of people commented on a good fight. Later on, in the crowd, I passed the ref for those two matches and he said: hey, you have some good moves!!

Then another gi fight. Very aggressive young girl who went straight for a flying arm attack. I'd seen her fight before, and mostly, she smiled when she submitted her opponents, and I think she bulldozed her way through her other divisions. Well, I gave her nothing much to smile about and she had to work her arse off. Unfortuately, she swept me and got points for that and the mount. No submission, as usual, my defence is pretty tight. I busied myself with the knee-elbow escape and I don't know if I was in half guard or getting there when time was up. She looked tired, but she won on points. I think that was the only figtht she didn't win by sub. Her parents came up to me after and thanked me and said: good fight.

Last fight was no-gi again in a different division. Similar story to the previous fight. I remember a pretty hard takedown and in the ensuing scramble, she got mount. I couldn't buck her but managed to get to my left side. Fended off attacks on my left arm and chokes. There was a spot when I had her in my half guard and I controlled her head and threatened her right arm. Absolutely have no recollection of how I got there but it lasted for a fair while. Then it was time up, and same old story... she won on points.

All in all, there aren't too many places where, when I think back, I'm horrified with myself. Compared with how I fought at my first comp six months ago, this was hugely improved. I enjoyed every fight, even the ones I lost. I don't mind losing if it's fair and square and I feel I went well, and it's all mutual respect afterwards because both had a good fight. I certainly came off the mat smiling every time and can genuinely say I enjoyed myself.

The fight I won, I won by sub. The ones I lost but were on points, none by sub, so that's waaaayy improved from where I used to be. What surprised me mostly were the comments from people I didn't even know :-) But I also had a lot of good feedback from friends.