We had a very BJJ-intensive day on Wednesday.

Glenn, our instructor, had been to USA the week before. On that occasion, he's managed to have a few sessions at Rigan's new school in LA. Of course he brought some new stuff with him :-)

In addition, one of the guys who used to train with us, but moved to Queensland last year, Matt, was down for a day. So it was decided that we'd get together and have a grappling-intensive Wednesday. So for about three hours on Wednesday afternoon, Ben, Warrick, Matt, Glenn and myself got together and we went over some stuff from Glenn's overseas trip and some other things. We rolled a bit, too.

We took a break for snacks and drinks before we re-convened for the usual 6pm BJJ class. The special thing about that class was that Warrick received his purple belt. Whoooopeee! Well done, man! 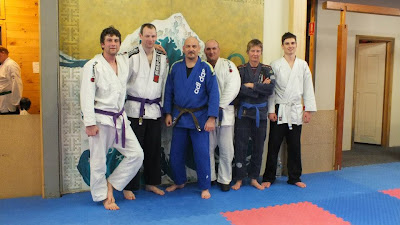