The seminar was held at Gracie Jiu Jitsu in Kilsyth, an eastern suburb of Melbourne. This meant a 370km round trip, but it was well worth it! Four of us went, so I had company, which makes for a more entertaining and seemingly shorter trip.

Royler was awesome. What a nice guy!

As expected, we went through some of the Gracie self defense techniques. Two of them dealt with problems from the front (grab/shove), three responded to choke holds from behind. Simple and as far as I can see, pretty effective.

This was followed by a series of techniques involving standing guard passes. Yes, some of it was specific grips, but a lot of it was more broad, like how maintain good posture. Not just to avoid the sweep, but to prevent the guard player from placing feet on hips. He emphasized that we need to adjust level when standing in guard as needed. We then looked at a similar scenario, but where the guard player has double sleeve grips instead of holding our heels. We learned a neat way of passing which negated those grips. From there, we looked at what we can do in case the guard player gets his feet on hip and bicep. Some very simple but effective grip changes were shown to deal with this, and where necessary, bringing a knee into play to dislodge one of his feet.

We drilled the setups and techniques independently, and then had a "play" with it, where each partner could present the other with scenarios, which required one of the passes we had just learned. Royler repeated reminded us of how important it is to be a good training partner.

Lastly, we looked at two side control escapes. Royler started by saying that sometimes you have to give something up to make progress. So if you are stuck in bottom side control and can't budge, the only resort may be to stick an arm out. However, within reason :-) Of course, it's also possible to end up in bottom side control with the far arm in a bad position anyway, and then we are forced to deal with that bad situation anyway. The two escapes both started from me having my far arm between his near shoulder and head, but with my elbow out - the worst place to have it... One ended with a head arm choke from the bottom, the other (recommended for when the guy is too big to do the choke) is basically just an escape that leaves the other person turtled with me on top.

At the end, we had some time for questions. They ranged from how to deal with berimbolos and similar techniques to what he might recommend for a small woman trapped on the bottom of a bigger guy in a self defense situation. Someone also asked about Royler's most memorable fight.

Royler was generous with his time during questions, and with photos afterwards. He's awesome. 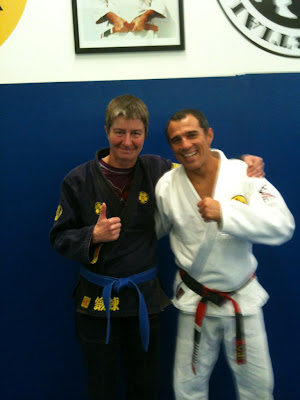