We came home safe and sound after an epic three day trip. We clocked up 1500 kilometres.

All went really well. My friend Yvonne and I left home at about 11 am on the Friday. We'd hitched up the horse float and enjoyed good weather and a pleasant trip to the South Australian border, where we dropped off the float. We hit the road again and headed towards Adelaide.

We stayed with a friend in the Adelaide Hills on Friday night. She had had an operation on her left shoulder and was still in a sling. We descended on her with copious amounts of Japanese take-away food and sat and talked about old times and horses. She enjoyed the break from her routine and we took her into Adelaide on Saturday morning. Yvonne and her went to the markets and some shops and then back to her place.

I had fun at the comp. I fought better than last time, but still lost both fights ("weight" class and open blue), so only came home with two bronze medals. Bronze medals sound excellent until I add that there were three of us in each division.... Well, the first one I lost by armbar, the open I lost on point. At the very least, I threatened her with an armbar and a lapel choke, so I wasn't on the receiving end of submission attempts. I was actually quite happy with that fight. But I certainly need to work more on getting better positions, and be more aggressive/proactive from the start. Lessons learnt....!

At the comp, I caught up with people I know, discovered that one of the other women from Melbourne is German and we discussed life in that language for the rest of the afternoon. I saw some really good fights in both the men's and women's divisions.

As they had discount entries for women, the whole thing only cost me $25 for two divisions and they gave me a t-shirt. 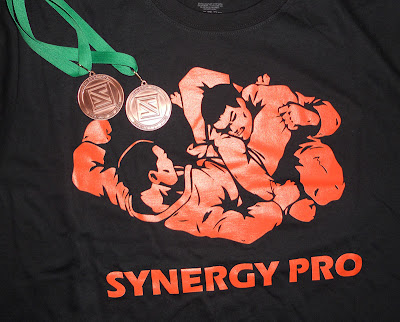 I was all done and dusted at 4pm, so Yvonne came and picked me up (having shopped herself out) and we hit the road. I took some time to worm ourselves through Adelaide and fuel up. A few hour on the road saw us get back across the border into Victoria, and to the farm just before 8pm. They had spare accommodation for us. We had a quick dinner, emptied the bottle of wine I'd brought for the occasion and had an early night.

We had a quick look at some horses in the morning and then loaded up the three geldings I had bought. They were a bit green and spooky, but loaded pretty much straight away. So we were back on the road before 12 and home just after 4pm. Yvonne's husband cooked some dinner, which was welcome, as we were pretty tired after the weekend.